“If light had a sound, it would be Salia’s voice…”: A round-up of African Writing

For the last few months, I have been editing a series of interviews titled 100 African Writers of SFF,  over at the Strange Horizons magazine. While the interviewees are writers of science fiction and fantasy, the conversations have been naturally broad-ranging, involving discussions of contemporary African writing that goes much beyond SFF. Some of the references have been tantalising enough for me to track them down, and buy and read the books themselves. Quick notes follow: 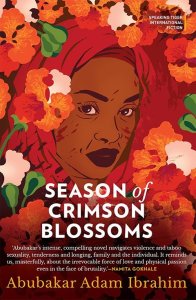 Abubakar Adam Ibrahim’s Season of Crimson Blossoms is a sensitive, empathetic – and, ultimately – tragic novel, set in the outskirts of Abuja (and sometimes transitioning to the conflict-torn city of Jos). Binta Zubairu, the novel’s protagonist, is a fifty-five-year-old widowed grandmother, survivor of a loveless marriage and the violent loss of her oldest child, and long reconciled to a cloistered existence and a slow exit from the world. All that changes when Hassan Reza, the local gang-leader and drug-dealer, jumps the fence intending to rob her, but falls in love with her instead. Through the course of their transgressive relationship, always teetering on the edge and threatening to come undone, either through the public discovery of Binta’s defiance of social norms or through Hassan’s one-brush-too-many with the law, Ibrahim brilliantly depicts both the suffocating, one-sided sexual repression that corrodes a conservative society, and its inevitable flip side – political violence.

For all its sensitivity, there is very little of the sentimental in Ibrahim’s novel. His account of human relationships is grimly realistic. Love is portrayed in all its messiness, confusions, and petty betrayals, a distinctly earthy emotion. And yet, there is a strangely suppressed lyrical quality to the prose, that almost struggles to make itself heard:

She dreamt like sepia. Like rust-tainted water running over the snapshots of her memories, submerging her dreams in a stream of reddish-brown. (p. 76)

This is immediately followed by memories of blood and violence (recollecting the murder of her son), as though to give way to lyricism is almost to insult the reality of the world (“What poetry after Auschwitz?”). In the riven worlds of Abuja and Jos, where even bare life cannot be taken for granted, love is not – and cannot be – an exception.

Other reviews: The Guardian;  The African Writer.

Odafe Atogun’s Taduno’s Song: Also out of Nigeria, here comes a much bleaker and darker novel. Taduno’s Song is a thinly fictionalised story about the legendary Fela Kuti, the Nigerian composer and singer who critiqued both colonialism and the post-colonial State through his music, and was violently targeted for it.  The eponymous Taduno is a dissident singer, who is exiled by the President of his  repressive one-party State. On returning from exile, he finds that his existence has been completely erased from the memories of his fellow-citizens, and even from the memory of the regime and the President – who, suspecting a trick, has decided to hold his partner in secret custody until he is found. With his vocal cords damaged in an earlier police beating, Taduno struggles to recapture his voice and regain his identity, so that he can save his partner. The quest takes him through the city of his childhood and youth, the neighbourhoods that knew and now disown him, the mansions of the rich and the squares of the homeless, and the underground prisons of “Mr. President.”

The austere, pared-back prose and imagery of Taduno’s Song, with its small cast of characters, its refusal to identify its setting in any concrete manner, and its grimly linear trajectory, is reminiscent of Kossi Efoui’s The Shadow of Things to Come, another “dictator novel” from nearby Togo. The novel’s minimalism sharpens the focus on its single, key theme – the limits of human resistance to concentrated power. Like Season of Crimson Blossoms, Taduno’s Song is also a novel tinged with tragedy – but also like Season of Crimson Blossoms, its sensitive account of how an individual struggles against power prevents it from being overwhelmed by tragedy, even if the outcome seems foreordained.

Out of South Africa, Nthikend Mohlele’s Rusty Bell is something altogether different. This is a coming-of-novel, whose combination of exuberance, self-deprecation, and linguistic pyrotechnics reminded me of Binyavanga Wainaina’s One Day I Will Write About This Place. The narrator – a young, black, South African man – takes us through noisy post-Apartheid South Africa, predominantly through a series of exchanges with his psychiatrist (no, it’s not written as a metaphor for the nation), but also through failed love-affairs, parental discord, and a surprise narrative appearance by a cat. Jagged, unorganised, and almost aphoristic at times, the prose shines brokenly like sunlight reflected off shattered glass. In the midst of which, however, you find passages like this:

Frank could have been a great banker, one of the greatest, if he hadn’t been born at the wrong time and with the wrong skin colour. His acumen with money, his softest of hearts, did not earn him a cushioned life in the South Africa of then and of now. There was a measured pride about him, though, a discreet pride in how he chose to love a world that showered him with doubt and disdain. For as long as I can remember, my father worked as a delivery man for Almond S. Spender Pharmaceuticals, criss-crossing Johannesburg’s avenues, responding to ailments of suburbs and, for extra income, weekend shifts transporting ‘Urgent Medical Samples’ for hospitals.

It was from this – what he called life’s tragic pranks – that he managed to put me through school, that chinks appeared in his quiet pride, fissures that made his thoughts drift, prompting that heavy sigh and yearning: ‘I would have loved to fly aeroplanes, Michael.’ He later joined Harmony Gas & Fuels as a man who fought to be master of his life, but who instead helplessly watched as life and history drained all that was supposed to make life pleasurable, a drop at a time. His was a life not lived, but leaked away, soundless, in the single-roomed tin shack we called home.

As far as love goes – untainted, ocean-current love – none comes close to the one I witnessed in our one-room shack in Alexandra. It was not the kind depicted in lifestyle magazines: of walks along sunny boulevards, boat cruises on blue oceans, nose rubbing in restaurants. It was not, though it had a poetic glow, love spoken about by forlorn poets, not one of horse riding and romantic bicycle excursions into the countryside, not burdened by visits to the Eiffel Tower or the Taj Mahal. It was a love that had learned to ridicule lack, a brazen kind of feeling, resolute, daring even, so ahead of earthly imperfections that it seemed otherworldly: that silent hand holding of theirs, that drinking from one coffee mug when sugar was in short supply…”

This is beautiful writing. It is as though every word has been strained through a sieve. 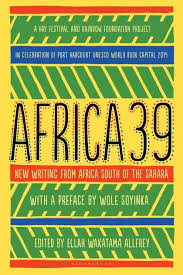 I came across an excerpt from Rusty Bell and a short story by Ihrahim in a remarkable book called Africa39, which I found lying around in Blossoms Bookshop at Bangalore, last summer. Africa39 is a 2014 collection of thirty-nine short stories or novel excerpts from African writers “South of the Sahara.” The quality is stupendously high, and the collection has a beautiful Introduction by Wole Soyinka, who refers to Mandela’s frisson-inducing line about how reading Chinua Achebe made “the prison walls fall down”, and follows it up with this lush description:

One of my favourite browsing grounds remains, unrepentantly, the garbage dump, or, to put it more elegantly – the flea market, especially of books. Those rows and jumbled stalls and trestles of broned, dog-eared second-hand books, pages frayed with age, evocative of contemplative, even escapist hours in the company of unknown faces, redolent of distant places and exotic adventures both of mind and body – such musty, unruly way stops have the edge, for me, even over the fragrance of newly-minted volumes on tidy rows of antiseptic shelves, with careful labelling under subject matter, author, geography etc. You never know what you will find in the flea market!

To an Indian, this resonates, doesn’t it?

2 responses to ““If light had a sound, it would be Salia’s voice…”: A round-up of African Writing”